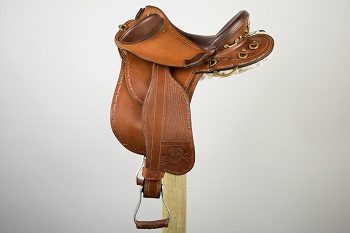 Horseback archers use different types of saddles. Some saddles are better suited for certain techniques than others.

Basically, in horseback archery, we can use any kinds of saddles.

The most important thing to remember is that saddle just like horseback archery quiver should accommodate the shooting technique that you often use and fit the horse well.

So before we buy a saddle, we need to consider first which shooting technique that we use the most; Do we often shoot in a sitting position or standing position while riding a horse?

English saddle uses a single girth with two buckles and three or more billets. It is quite popular in many different equestrian sports disciplines (such as dressage, show jumping, endurance, reining, etc.).

And so in horseback archery, the English saddle is quite popular as well especially among those who are just getting started.

The reason, it is easy to use and offers excellent maneuverability so you can try both seated and standing techniques if you don’t have an inclination toward either one.

However, in spite of its great maneuverability, it lacks both security and stability that means it is easy to get into a seated or standing position but holding yourself stable to shoot can be difficult.

And if you can’t hold yourself stable during the shot, you won’t be able to shoot accurately.

Contrary to the English saddle, Western saddle offers excellent stability at the cost of maneuverability; this means getting yourself into a shooting position can be hard, but keeping your position steady to shoot can be easier than in many other saddles.

The Western saddle is best suited for archers who use a seated shooting technique. Those who use a standing technique will find the saddle challenging to use as there is a large horn at the front of the saddle that holds you back from standing.

The Western saddle uses a different girthing method called a cinch. To tighten or lock the cinch, you need to create some kind of pulley system.

The create this pulley; you need to loop the long strap through the buckle and back on itself. The strap is then tightened by a buckle or knot to prevent it from slipping off. You need to be careful as you might accidentally overtighten the cinch.

Australian stock saddle is known as one of the most versatile saddles in horseback archery that offers a great compromise between maneuverability and stability.

Some horseback literature that I read state that the Steppe saddles are the saddles explicitly designed for horseback archery.

They are used a lot in Mongolian cavalry or other Asian cavalry armies from an old-time and thus different from the other saddles that we have described above, the Steppe saddle’s design is distinctively influenced by military and Asian saddle designs.

From forward mounted stirrups to a large flared pommel and cantle to a small seat, all of the Steppe saddle’s features accommodate standing shooting technique.

The forward mounted stirrups help to balance and straighten the leg position while standing which makes it easy to shoot while turning in the saddle.

As you’re standing while turning in the saddle, you can brace your thighs against the raised pommel and cantle to hold your position steady and to guide you to the correct target.

The McClellan Saddle is another type of saddle worth mentioning. This saddle has been used by the US cavalry since 1859.

The design that includes a deeper seat and the stirrup leathers that run underneath the front quarter side strap makes this saddle a well-balanced saddle that offers good maneuverability and stability.

Hi there, I’m Richard.M.Lee, a Texas guy who has been shooting bow for over 20 years now!  This is the site where I share everything I’ve learned.