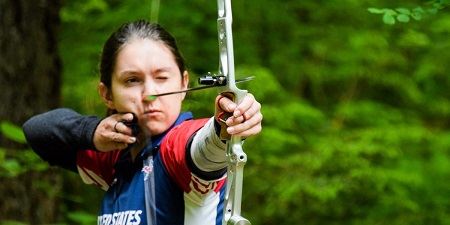 Opinions vary on the question of how to find a proper anchor point since different archers can have different anchor points depending on the shooting style that they use.

Thumb shooters generally place their thumb knuckle around the corner of their mouths as the basis of their anchor point.

Finger shooters that shoot with three fingers under the grip usually put the tip of the index finger in the corner of their mouth.

Split-fingers shooters place the tip of their middle finger in the corner of their mouth too.

In the field, you might find some minor variations from the positions above. The exact point is not that important, after quite a while, you might also find an anchor point that differs from the consensus but fits you best.

Why Anchor Point is Important

These are the immediate things that would happen if you shoot inconsistently from different anchor point locations every time:

The more erratic the arrow flight is, the more unpredictable your vertical impact point will be.

2.A longer or shorter draw makes the bowstring to be released closer to or further from the body. This will make the bowstring’s path to be different on every release, and as a result, your lateral impact point will be unpredictable as well.

What Do You Need To Know Before Finding Your First Anchor Point?

To find the anchor point that suits you best there is no other way than experimenting yourself through trials and errors.

However, here are some principles that you may want to adhere to help you in your quest.

1.Remember the principle of draw force line when you select your anchor point.

What is a draw force line?

Draw force line is a straight line from the draw elbow to the anchor point to the bow hand and toward the target. At full draw, the forearm of your draw hand should form one straight line with the arrow, and the shaft should be lined up under your eye.

Maintaining this one straight line is essential for accurate shooting and most importantly to avoid the risk of injury that could happen if your shoot is not straight.

If you place your anchor point too far forward, you won’t be able to form this straight line as your elbow will stick out when you draw your bow.

2. You should be able to draw comfortably.

Your anchor point should be placed in a location where you can reach it comfortably when drawing the bow. It should not be set too far forward or backward. If it is too far back, various misalignments can occur.

The anchor point that is too far back can also disrupt your draw force line, interfere with a clear shooting and is likely to cause injury.

Just as the name says it, the anchor point floats in the air instead of touching a specific part of your head or body. Theoretically speaking, there is no reason why you couldn’t use this floating anchor point.

However, speaking from experience, it may be easier for you to start off with a fixed anchor point then move on to a floating anchor point style if you insist.

The most obvious advantage of a fixed anchor point is that it is easily repeatable and thus more likely gets you a more consistent shooting.

Looking Down The Arrow

Those who shoot with fingers style may find themselves shoot best when “looking down the arrow”. This aiming style happens as a consequence of placing the anchor point directly below the dominant eye, around the height of the mouth, which often done by fingers shooters.

If you find that you aim most effectively with this aiming style, you would want to try placing your drawing hand in touch with your upper jaw (not the lower) as this is the most consistent way to anchor in this position.

Now, let’s put it into steps all the details everything that we have learned so far. Before we begin, you will have to ask a friend to help you with this exercise.

1.Take your bow and draw it. Remember the principle of draw force line that we have been learned previously when you pull your bow. As you’re drawing the bow, your pose should form a straight line from bow hand to the bow shoulder and on to the drawing shoulder.

2. At full draw, ask your friend to check that your draw force line is straight.

3. Once your draw force line is straight, the next step is to ask your friend to check your vertical alignment. The vertical alignment can be verified by drawing a straight line between the draw elbow and the bow hand in the area around the arrow and the pivot point.

The pivot point is the area on the hand at which the force is centered if you were to open your bow hand and just use the string to pull the bow back into the hand.

4. Once you finish the third step, by now, your draw hand should be somewhere touching your body or face, that’s your anchor point.

You will likely find yourself repeating this exercise several times until you find the best anchor point that fits you the best.

The simple rule to bear in mind is if you are not sure don’t shoot. If you start to shake and can’t get the shot lined up, put down your bow, take a breath, and try again after a minute or two. Remember, only release the arrow when you are confident your shot is lined up.

Hi there, I’m Richard.M.Lee, a Texas guy who has been shooting bow for over 20 years now!  This is the site where I share everything I’ve learned.